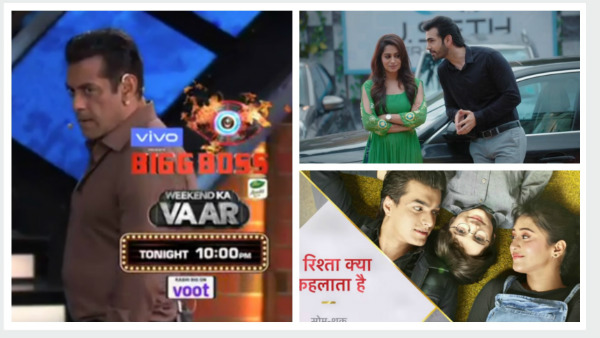 The TRP report for the second week of 2020 has been revealed. According to the TRP list, the top number is ‘Kundali Bhagya’, Salman Khan’s ‘Bigg Boss 13’, and ‘Naagin 4’. In Bigg Boss this week, the fight between Siddharth Shukla-Shahnaz Gill and Vishal-Madhurima created a furore. Due to these controversies, the show was very much discussed. This is why Bigg Boss 13 has secured the top 3 spot for the first time.

Viewers are curious as to which TV show was a hit this week and which lagged behind in the TRP race. So tell you, Zee TV’s show ‘Kundali Bhagya’ was number one on the TRP list this week. Ekta Kapoor’s serial ‘Naagin 4’ has secured second place as soon as it arrives. It is believed that by next week, ‘Naagin 4’ will reach number one. At the same time, Salman Khan’s show Bigg Boss 13 has reached the third place.

Shivangi Joshi’s serial ‘Yeh Rishta Kya Kehlata Hai’ has made a big jump this time. Last week, this serial came in 10th place, but this time ‘Yeh Rishta Kya Kehlata Hai’ has achieved the fourth position. The reality show ‘Indian Idea’ is at number 11 and ‘Tarak Mehta Ka Ooltah Chashma’ show is at number seven. Daya’s entry in ‘Tarak Mehta Ka Ooltah Chashma’ is being repeated, due to which the show is going to hit once again. 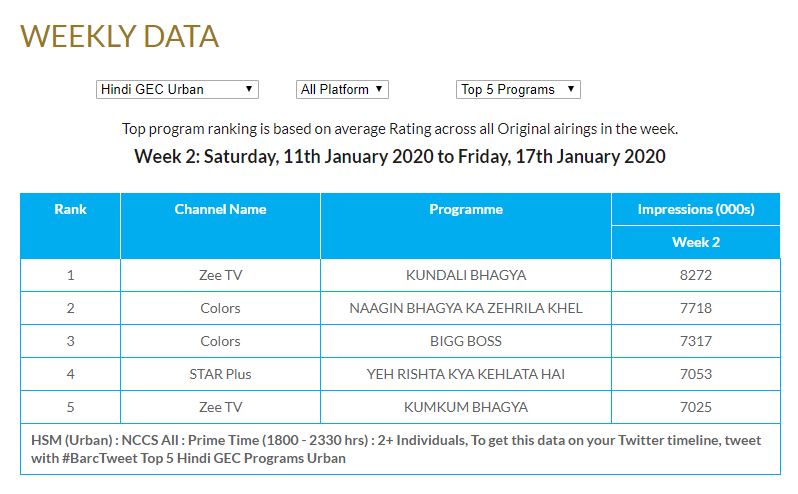 This Zee TV serial has been doing a great job in the TRP race for a long time. This time it has achieved the number one position. The viewers of this serial are very happy with this news.

Nia Sharma, Anita Hasanandani’s show has been few days since Nagin 4 but it has rocked as soon as it arrived. Naagin serial proves to be a super hit every time.

Salman Khan’s show Bigg Boss 13 has done wonders this time. Due to all the uproar in the show, the show has reached the number three straight.

Shivangi Joshi’s serial ‘Yeh Rishta Kya Kehlata Hai’ is going to be quite fun. Where the heroine and hero’s love story once again caught the attention of the fans. This is the reason why this show has jumped from 10th place to fourth position.

The biggest change seen in the list of TRPs is the comedy show of Kapil Sharma. Which has received a lot of damage. He has now slipped to ninth position. Earlier this show was at the third position.