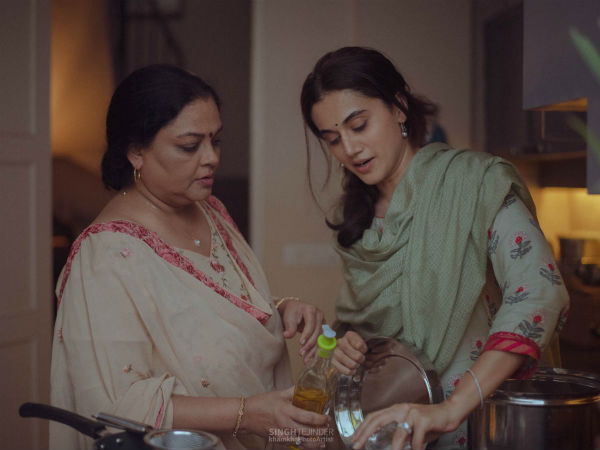 Amrita (Taapsee )’s mother (Ratna Pathak Shah), upset over her daughter’s decision, tells her husband (Kumud Mishra), “Women have to sacrifice their will for the family. It was taught to me by my mother, by her mother .. and perhaps by her mother. “This dialogue clearly shows the conflict between a mother and a woman. This conflict is due to the society, which teaches every girl the lesson of civilization, culture, dignity and beauty. Whereas the ideal daughter-in-law like Amrita (Taapsee Pannu) makes tea as early as morning, picks up her husband, feeds her favorite snacks, also checks her mother-in-law’s blood sugar level and leaves her husband to the car. Everyday , With a smile.

Amrita, who has left all her dreams behind, now has only two wishes – respect and love. But when she is also snatched away from him, she questions and takes a drastic step. Such a move is a strong slap on this patriarchal society.

Amrita and Vikram (Pavel Gulati) are married couples and live their upper-middle-class lives among the family. Where Vikram is dreaming to advance in career and is busy with work. Amrita is a perfect wife, daughter-in-law, daughter and sister.

She is a classical dancer and if her father believes, she could have made a career in it as well. But for the family, she leaves her dreams behind. She seeks happiness in the happiness of her husband .. That is why ‘slap’.

A loud slap from the husband’s hands in front of all the guests at the house party. Amrita gets choked up with this incident. Husband, mother-in-law, mother, brother .. Everyone advises that forgetting this incident, she should move forward, move on. But Amrita does not do this. She refuses to forget the incident. The father is with her at every step.

She is upset and angry with the slap on her daughter’s cheek. He is against any form of domestic violence, even if it is a slap. The son-in-law comes to him and says – I made a mistake .. What should I do now? Will never be ahead. So the father says – the question is more important why did this happen?

The story is not just about Amrita. Rather, there are five more women associated with Amrita. Divorced neighbor (Diya Mirza), mother-in-law (Tanvi Azmi), mother (Ratna Pathak Shah), lawyer Netra Jai ​​Singh (Maya Sarao) and Amarita’s housemate Kawwali Bai .. all these characters go together in the story .. an contradiction. with. All of the society is surrounded by masculine thinking. But Amrita’s fight also gives her the chance and courage to overcome this thinking.

Taapsee Pannu’s work in Amrita’s character is superb. She is sensitive as well as firm. With every relationship, different expressions of Taapsee are effective on the screen. Taapsee’s scenes especially with father turned Kumud Mishra are heart touching.

The director has woven many beautiful moments between the two. At the same time, the couple of Kumud Mishra and Ratna Pathak Shah as husband-wife is also very well received. Pavel Gulati is attracted to the role of Amrita’s husband Vikram. Director Anubhav Sinha has given him many shades and Pavel has done him full justice.

There is a scene where Vikram, looking at his neighbor’s (Diya Mirza) car, tells Amrita in a skeptical manner – “He has taken a new car again .. What does it do?” “So Amrita flatly replies -” Hard “.. As co-star Diya Mirza, Manav Kaul, Tanvi Azmi, Maya Sarao have done excellent work.

Mulk, directed by Anubhav Sinha after article 15, has once again struck the thinking of society. This time the film has also raised questions and has also given an answer .. Slap, it’s not just that. They do not even realize when the desires of the women buried in the masculine thinking get evaporated. But why not? The film also answers this.

Anubhav Sinha has woven every character and every relationship so well and effectively that you will feel connected to everyone’s story. The father’s concern for the daughter or the concern of the mother stuck in the parameters of society .. The outline of each character has strengthened the story. Especially the dialogues have been taken care of.

As the anxious mother says- “Women have to kill their minds .. must learn to tolerate a little.” Or the day of the maid who eats her husband every day, asking the husband – “Why do you kill me?” And the husband’s answer- “Do I need a license to kill you” ..

The film has only one song – a piece Dhoop, written by Shakeel Azmi and music by Anurag Saikia. Along with the story of the film, this song continues to touch the mind and heart. This song also proves helpful in setting the mood. Its lyrics are fantastic. The background score given by Mangesh Dhakre is impressive.

See or not see

In our society even today, the malevolent mindset dominates and instead of questioning it, people are going to consider it as a part of nature. Directed by Anubhav Sinha, the film ‘Thappad’ strikes this same male-minded mindset of the society. Not with anger or violence, but with logic and emotions. This film husband, wife, father, mother, brother, sister, lover, girlfriend .. Everyone should watch and consider it. 4 stars to the film.