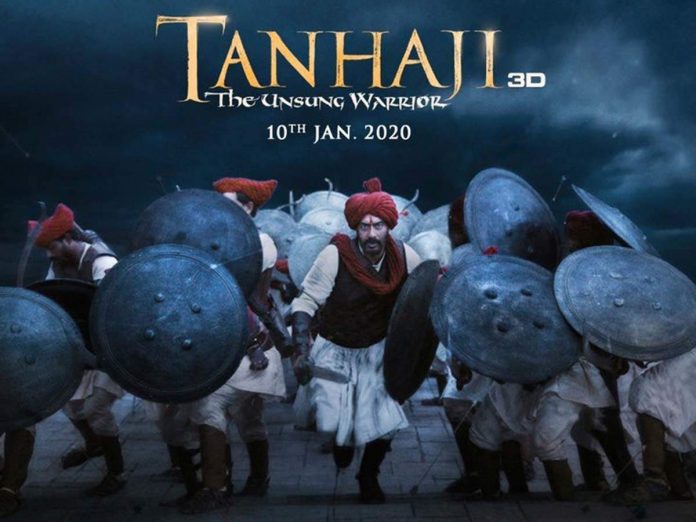 We have all heard the story of Chhatrapati Shivaji Maharaj since childhood, but there will hardly be any public to his friends and relatives who join the battle of Swaraj with him. One such friend of Shivaji was Tanaji Malusare. Tanaji was considered to be Shivaji’s right hand and he fought big battles.

The film Tanaji: The Unsung Warrior is the story of the brave warrior Tanaji, who put his full strength to fulfill Swaraj’s dream.

This story is about the war of 4 February 1670 in Sinhagarh, then known as Konadhana. In this war, Tanaji (Ajay Devgan) and Maratha warriors fought against Aurangzeb (Luke Kenny) and his special man Udaybhan Rathore (Saif Ali Khan) for Chhatrapati Shivaji Maharaj (Sharad Kelkar).

Aurangzeb wants to capture the whole of India and Shivaji’s special Tanaji has put his life at stake to stop it. What will be the result of Udaybhan and Tanaji’s fight? This is what you will see in the film.

Ajay Devgan has done a good job in Tanaji’s role. A vicious and loyal warrior who can do anything for his country and Shivaji Maharaj. Ajay Devgan has played this role well, but somewhere you will miss Bajirao Singham.

Kajol plays Savitri Bai in the film, who is Tanaji’s wife. Kajol and Ajay Devgan’s pair is as beautiful as ever. Kajol makes whatever scene she comes in.

At the same time, Saif Ali Khan is giving a tremendous competition to Ajay with his strong performance. In front of Saif, your attention will not go to any other actor. In Udaybhan Rathore’s extremely fierce character, Saif has taken such a life that you will remember him in times to come. Saif’s heartless style and his hungry eyes make him heavy on other actors. The collision between Ajay and Saif is also worth watching. But in this too, Saif can be seen clearly overshadowing. Everything from his dialogue delivery to cynicism is praiseworthy.

Tanaji: The Unsung Warrior is made by director Om Raut. His work is good, the direction and editing is also good. However, the pace of the film will feel very slow in the first half. Actors do not have as much power in their words as they are talking about. Animals were not used much in the film, due to which the help of VFX has been taken. VFX has been used to show characters riding and fighting, which sounds strange but not so bad.

Apart from this, the cinematography and editing of the film is good. You will like the grandeur and visuals of the film’s sets. Also the music and background score of the film is very good, which adds life to the film.