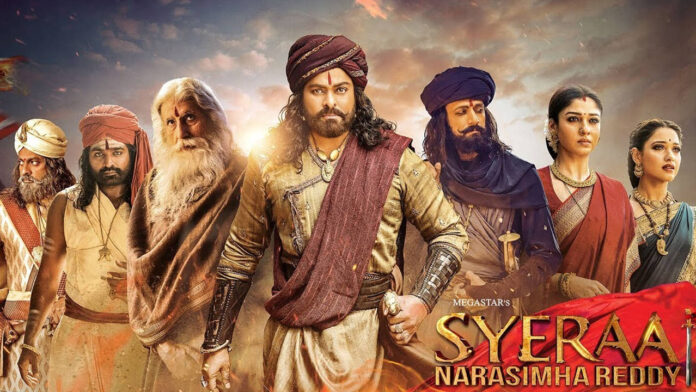 Sye Raa Narasimha Reddy-The unprecedented success of ‘Baahubali’ has inspired the filmmakers of the South to serve their lavish budget films in addition to Tamil-Telugu Hindi audiences. After ‘Saaho’, director Surendra Reddy’s ‘Sai Ra Narasimha Reddy’ is also seen to be following this tradition.

The filmmakers have tried their best to woo the Hindi audience with amazing sets, breath-taking incredible action and presence of mega stars like Chiranjeevi, Big B and Sudeep Kicha.

The story of the film is based on the true event of history. Ten years before the national movement of 1857, Narasimha Reddy (Chiranjeevi) played the bugle of rebellion against the encroachment of the East India Company ie British. Narasimha Reddy, the Paladar of Uyyalwada, is ready to go to any extent to protect his subjects and the earth. He is a brave man shown by his Guru (Amitabh Bachchan).

He falls in love with the state dancer Lakshmi (Tamanna) and vows to make her his own, but by then he does not know that he was married to Siddhamma (Nayantara) in childhood to save the famine-stricken people. Was. Now once the drought falls, according to Guruji’s order, he has to sit with his wife and perform the yagna so that it can rain.

Enraged by the atrocities of the East India Company and the wrongful collection of taxes, he refuses to pay rent to white officers. This rebellion of Narasimha to the whites is not an eye. They inflict all kinds of oppression on his subjects, but Narasimha’s rebellion soon takes the form of revolution and then binds the country into a mass movement against the British.

He has allies like Avku Raju (Sudeep Kicha) and Raja Pandi (Vijay Sethupathi) in this movement, as well as opponents like Ravi Kishan. The flame of revolution spread by Narasimha Reddy later takes the form of a huge freedom struggle, which came in front of everyone in the form of national movement of 1857.

The story of the film is taken from the page of history when Narasimha raised the slogan of rebellion against the whites for the first time. The film has become over-dramatized in many places to reflect the Bhaktiras due to patriotism, but they have proved to be nineteen in terms of sets and action.

The grand sets that the director has used to depict the era of 1857 are praiseworthy in their own right. Looking at the stunts of Greg Paul, Lee Vitakar, Ram-Laxman and A Vijay, your eyes do not remain wide. The length of 2 hours and 50 minutes is missed. The film would have looked more crisp and interesting if it was 20-25 minutes less.

The screenplay and film writing could be improved. The film’s Climax and Pre-Climax seem drawn despite being patriotic. The music is average. Mega star Chiranjeevi of the South has appeared on screen with her charm in terms of acting.

He has justified the incredible action scenes with his body language. Sudeep Kicha is remembered in his role. Tamannaah disappears after the opening scenes of the film and appears at the end of the film. She looks beautiful. His dance of fire has become memorable. Nayantara has given justice to her role. Big B has been influential as Guruji, but his role in the film is limited. The supporting cast is doing well. Made in Tamil, Telugu, Kannada, Malayalam and Hindi, the film’s budget is said to be 250 crores.