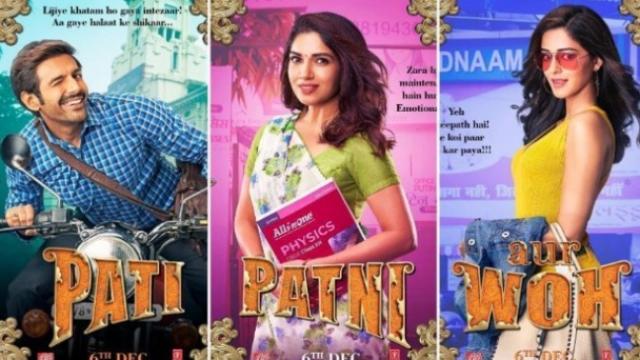 Pati Patni Aur Woh movie is very similar to today. The term ‘Pati Patni Aur Woh’ has been very popular not only in the industry but also in the society. Pati Patni Aur Woh is a 1978 remake of Sanjeev Kumar, starring Vidya Sinha and Ranjita. Its director Mudassar Aziz has paced the film in a very entertaining form.

Pati Patni Aur Woh is the story of Chintu Tayagi i.e. Karthik Aryan. In this, Karthik Aryan is a straightforward obedient son and public servant. Karthik Aryan gets married to Vedika i.e. Bhumi Pednekar, and after some time of marriage Karthik Aryan. Life starts getting merciless. With this, there is an entry in the life of Karthik Aryan, that of penance i.e. Ananya Pandey. Karthik tries to revive the lost adventures of his life with Ananya, and thus becomes her entry into the simple life of husband and wife. Film director Mudassar Aziz has kept the story quite simple and has tried to make it as per today’s era, though he takes a long time to establish the characters, and there is a little bit of matter here. Otherwise the story of the film is completely entertaining.

The quality of director Mudassar Aziz’s direction is that the sequence of humor and entertainment that starts from the first scene lasts till the climax. Yes, he did take some time to develop the story, but after that the funny characters are seen flowing in the story. The dialogue and one liners of the film are very sharp. Kanpur’s backdrop makes the film interesting in terms of language and accent. Mudassar’s casting is also perfect and she adds strength to the story. Editing could be a bit crispy. Climax is fun. In the music of Tanishq Bagchi, the remix of Ankhi to Goliat is being liked a lot. It is at the ninth position in Radio Mirchi’s list of Top Twenty.