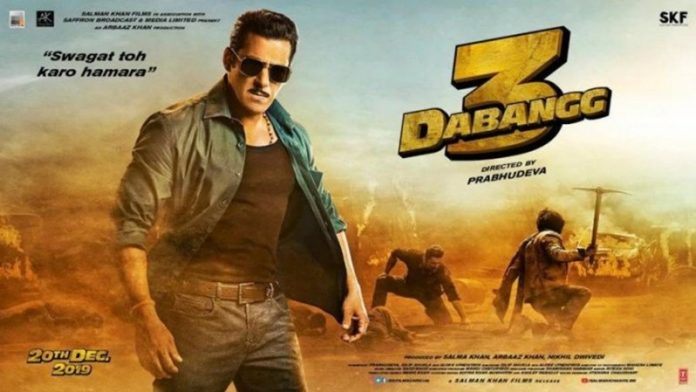 If Prabhudheva has presented with ‘Dabangg 3’ while furthering the franchise of ‘Dabangg’, he has surely brought it to the attention of Salman Khan’s fans. The last two films of this franchise have been taken over by their fans and now Dabangg 3 is a prequel to the previous films. Ever since this film has been announced, it is being awaited.

The story begins in action and comic style, where Chulbul Pandey (Salman Khan) saves the gold jewels robbed at a wedding and gets them back. Solving the case, Chulbul is confronted by the dreaded mafia kingpin Bali (Sudeep Kicha), where Chulbul remembers all the wounds of his past, which are still green. Bali was the one who snatched everything from Chulbul in the past. Now that Bali once again wants to wreak havoc in Chulbul’s life, it becomes necessary for Chulbul to protect his family as well as the duty of his uniform.

Chulbul used to love Khushi (Sai ​​Manjrekar) before meeting his wife Rajjo (Sonakshi Sinha). Actually Chulbul’s mother (Dimple Kapadia) liked Khushi for Chulbul’s brother Makkhi (Arbaaz Khan), but if Makkhi had no interest in getting married, Chulbul and her fiance Khushi went against the dowry tradition as a doctor. Is determined to make, but only then their love is eclipsed. Bali looks at happiness and is eager to do anything to get happiness. What did Bali do to Chulbul in the past that it was necessary for Chulbul to settle the accounts? Will he take revenge on Bali? Will he be able to live up to his duty? You will have to watch the film to know this.

Prabhudheva as director has given everything that fans of Salman Khan want to see. He has also repeated himself in this affair. This time, he has made Salman’s larger than life image more grand. There are many scenes that will force the front benchers to hoist coins and whistle. This on-screen policeman specializes in killing multiple goons at the same time. Whether he is shirtless with a strong body or to dance with Sonakshi and Sai, he has used Salman a lot in every act, but he has completely neglected the story.

Had Prabhu paid attention to the length of the film, the film could have been more crispy. Some of the film’s action scenes are amazing. Scenes filmed in slow motion, or climax fight, Raw action is very exciting. In all the spices of the film, Prabhu has also put issues like dowry, demonetisation, water conservation. Many comic scenes are clumsy.

But speaking of music, ‘Munna Badnaam Hua’ is at the tenth position of Radio Mirchi in Sajid-Wajid’s music, while ‘Awara’ and ‘Hood Hood’ are also being liked.

There is no doubt that Salman’s role in the role of Robinhood Numa policeman is elevated. He has played Chulbul in a typical ‘Salman Khan’ style. Whether it is action or romance, Salman’s swag is seen everywhere. Whether it is an on-screen scene or a talk of romance with Sai and Sonakshi, Salman has started converting. Sudeep Kicha’s character as Bali is as strong, and he has played him in as strong a style. This villain is extremely dashing on screen. Sonakshi is beautiful, but she doesn’t get much screenspace. Sai is cute and innocent as a debutant actress. They have many possibilities. Arbaaz has done justice to the role. The supporting cast went well.