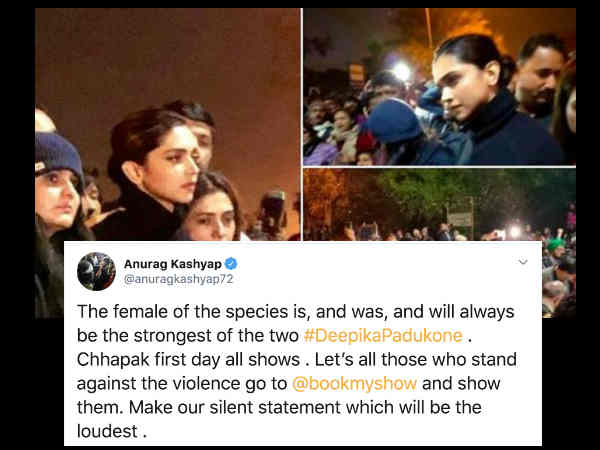 Deepika Padukone’s film Chhapak is scheduled to be released in two days but Deepika Padukone reached the JNU campus to support the students in the ongoing protest against the violence in JNU. Everyone was stunned to see them there. Deepika also expressed her opposition in black clothes. However, Boycott appeared on Twitter immediately.

But this time Bollywood did not back down and big celebrities strongly supported Deepika Padukone. From Anurag Kashyap, Swara Bhaskar to the big faces of the media also came forward in support of Deepika and since then #ISupportDeepika has been trending at the top of Twitter.

Significantly, Deepika Padukone is the producer of Chhapak and her going to JNU could have a significant impact on her film’s earnings but she did not back down from supporting it. To honor her, Anurag Kashyap also posted his Twitter profile picture and cover photo of Deepika’s JNU.

In this case, the silence of all the big heroes of Bollywood is disturbing the people. At the same time, many heroines including Sonam Kapoor, Alia Bhatt, Swara Bhaskar, Richa Chadha have spoken out against this violence. And today Deepika has done a very courageous job, after which people are fiercely supporting her

The group of women was, and will always be, more courageous. Chhapak for Deepika Padukone – Must see more shows on day one. Whoever is against this violence, will show their support, go to Book My Show and show these people. Our peaceful work should be the loudest voice.

A Twitter handle wrote that Deepika Padukone is being opposed everywhere will you support her. Retweeting this, Anurag Kashyap went back to Book My Show and urged him to book all four shows on the first day. However, someone also taunted him that – apne ki chal na rei, a good joke. In response, Anurag Kashyap used to say – it is a joke, not a joke.

Aakash Banerjee also wrote in tweeting – whether a leader is preparing for the upcoming election or an actor premiered his film, both of these things will always be a huge risk to do what Deepika Padukone did . No one in Bollywood would have advised him to do this work, two days before the release of his film. But she did not want to play SAFE. My full support to them.

Journalist Rana Ayyub also wrote that Deepika Padukone needs a lot more courage to do what she does today. Anurag Kashyap also reminded people that he is the producer of this film, there is even more risk for him. But today he has even more respect and pride for them.

Now we will see

Pride and Respect Deepika’s splash was written by Star Vikrant Christ while sharing pictures of Deepika from JNU – My scene was proudly swelled.