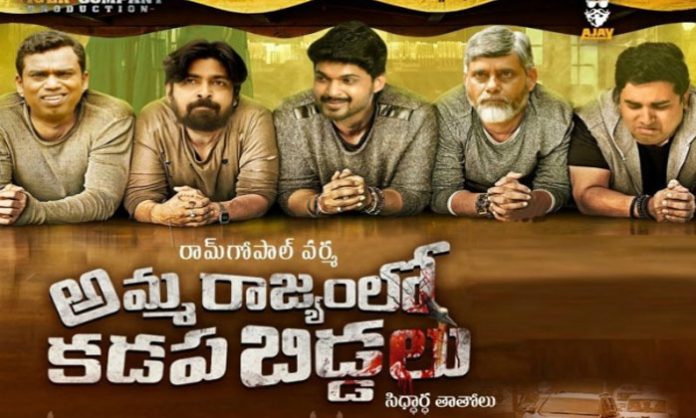 RGV’s controversial Amma Rajamalo Kadapa Biddalu has finally been released after much controversy. Let’s see if RGV has anything in store for us at the moment.

The film is set in AP State. Jagannath Reddy (Amer Ajmal) became the new sworn officer of the state. His victory with Vipul Velugu Desam Party chief Babu is not good at all. Jagannath Reddy begins to fulfill his electoral promises in full flow and upon seeing this Babu and his son, Chinna Babu gets furious and feels insulted. This is the time when Dayanani Ram entered the scene and planned a big conspiracy against the ruling party. He becomes a little successful in his mission, but is suddenly killed. Who is behind the killing of Dayani Ram? How will Jagannath Reddy react to all this? To know the answer, you need to see the film on the big screen.

The setting of the film is very good as the current political scenario is well established in AP State. The film is full of spoof characters of real-life leaders. It is good to show them in a realistic way. But more than this the RGV mocked some politicians who tickle the funny bones of the audience as they are shown sarcastically.

Coming into the performance, Ajmal Aamir in the role of Jagan Reddy was brilliant. He got the body language and facial expressions of the eminent leader and gave a good performance throughout the film. The actor playing the role of Babu was also decent. His features and manner of his screen presence are interesting. Ali was good as a speaker. But it was Star Ramu who played the role of PP Paul. His comedy timing and dialogue delivery was very good and he also provided a good laugh.

More than a serious drama, the film is a goofy satire on some of AP politics’s known faces. There is no seriousness in the story as RGV has only taken a few real-life incidents and added a fictional story that doesn’t work. Some prominent leaders of the state have been made scapegoats and fun was created through them. In the film it seems a bit absurd and does not give a serious atmosphere at all.

Many types of political scenes are cinematic and seem silly. The film’s narrative is slow and boring even after the first half. There is no catch in the proceedings as there is no eagerness in the scenes. The last twist revealed about the lead female actor seems absolutely silly and not at all appropriate. The main pre-climax also goes for a toss and ends the film on a disappointing note.

The camera work is very good as RGV is known to show its action from different angles which looks good. The music by Ravi Shankar is decent and so was his background score. The writing is weak because the story has all the fictional dramas that don’t go well. The dialogues are decent and so was the production design. The director is coming to RGV, the idea of ​​his story is good, but the way he fictionalized scenes in real life is not good at all. His screenplay goes for a toss and he makes the film a more witty satire than a serious and entertaining political drama.

Overall, Amma Rajamalo Kadapa Bidalu is a satirical drama based on current events in AP State. RGV has taken some real-life events and added a fictional story and ending that doesn’t work at all. Some satirical comedy from some politicians provokes laughter, but the lack of entertaining episodes and the need for political drama is completely missing making this film boring and silly this weekend.